Being asked to judge the Against The Grain Poetry Press competition was both an honour and a joy, but also a responsibility. My sense of all three deepened as I read the nearly 600 poems entered for this year’s contest. These were wide-ranging in form, style and content including: contemporary life, love and loss; narratives, landscapes and character portraits; muses, art, folklore, history, politics, environmental and literary influenced pieces… I was moved, bewitched and awed by striking images, metaphors, the music of the words, and more.

Every poem was read and enjoyed. Overall, I came away with a sense of passion, conviction and caring. I was reminded of the power of poetry and my own love of language. No matter how far an individual poem came in this particular competition, all of the poems were part of this effect and I’d like to thank all entrants for that.

For those interested in the judging process, over many readings and re-readings, I self-sifted the nearly 600 poems down to a very rough longlist of around 90 poems, a more decisive longlist of 38 poems, a shortlist of 21 poems and then a top nine, before finally deciding my winners .Throughout this process, I was looking to see how poems resonated and continued to resonate both during the reading and in the gaps between my reading when I was busy with other things. Another thing that I like to do, particularly further through the process, is play devil’s advocate and throw accusatory questions /potential faults at the poems, such as ‘But does it show y?’ or ‘Could it have done z better?’ etc. Most poems that rose to the top robustly refuted the accusations. Others came back with the answer: ‘But even if this were true, wouldn’t that mean I’m even more brilliant since you still keep coming back to me?’.

I’d like to congratulate and thank everyone whose poem made my final shortlist below. To those who didn’t make the shortlist this time, I’d say please don’t be discouraged. There was so much that I admired in all the poems, but my job was to pick just three winners.

Second: At a stroke – Jane Pearn

starlings – This poem looks beautiful on the page and is powerful, energising and musical to read aloud. Comparatively everyday words are combined to create an imaginative and evocative new vocabulary in which sound also plays a key effect. Form and content work as one, and repetition is used in a wonderfully reinforcing and accumulative effect across the poem. Although ostensibly about starlings, the spiritual level of the poem allows it to be read analogically in a way that’s relevant to human experience, society and community. This memorable poem reverberated in my mind and emotions more and more after and between each re-reading.

At a stroke – In this poem, again, I had the impression of well-placed, carefully weighted, imagery, metaphors and sounds. Use of punctuation, white space and crossings-out felt crafted and precisely poised with a befittingly musicianlike sense of timing, all reinforcing the moving narrative of illness and loss, as well as characterisation. A moving, “beautifully judged” poem.

Pebble – This beautiful poem addressing a pebble as “small symbol of this precarious world” unfolds to something much larger – encompassing nature, human experience and the essence of life itself. I was struck by the striking images in this poem, the sounds of the words chosen and its shape on the page, reflecting a tidal tug and flow. Every time I re-read this evocative poem, I was struck by a sense of wonder that remained with me.

I look forward to discovering the poets behind the winning poems, and hopefully enjoying more of their work in future.

We will be publishing the winners and special mentions…

We’re delighted to be publishing Olga Dermott-Bond’s pamphlet, apple, fallen this spring with a launch at The Poetry Café on March 21st (along with the brilliant Litany of the Cardiologist by Denise Bundred). We’re hoping 2020 will be a successful year for all our poets and we’ve been catching up with them lately to discover their highlights of 2019.

Poetry is crammed in around the edges of my too-busy life. As a full time teacher and mother of two young daughters I am never far from essays to be marked, spellings to be learnt, birthday cards to write. There is too much clutter and not enough time, but that’s where my poetry exists.

2019 began with me attending the launch of Bath Flash Fiction Volume 3 reading my flash fiction ‘Mr Rochester and I’, a piece that would later be selected for the anthology ‘Best Microfiction 2019’.

Keeping things short and sweet I really enjoyed the Verve poetry festival in Birmingham, where I attended a very enlightening prose poetry workshop by Carrie Etter – and I have been re-reading her collection Imagined Sons ever since.  Also in February I gave my debut reading at The Poetry Café in London for the launch of Candlestick Press’ delicious  ‘Ten Poems about Breakfast’ as my haiku sequence ‘Toaster’ was a winner. 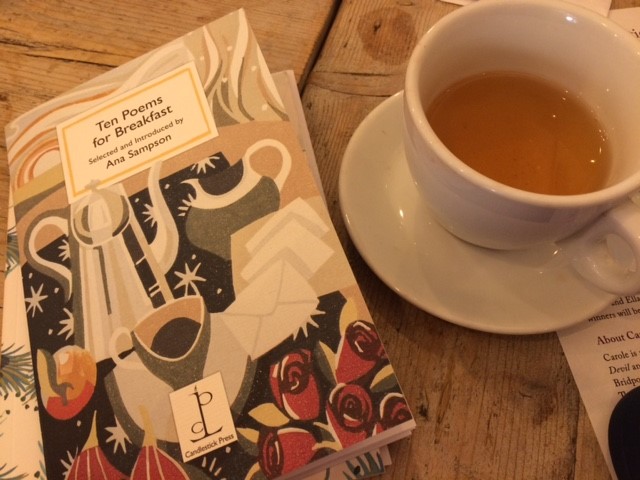 At the poetry café

I am addicted to certain poetic forms – sonnets are one of them – and so I was delighted to have my sonnet ‘summer just gone’ commended in Cannon’s Mouth sonnet or not competition. I was honoured to be chosen as a commissioned artist to write a poem as part of the project leading to Coventry as City of Culture 2021, based on universal human rights.

Into Spring and summer I was humbled and thrilled to be selected as one of the emerging poets for the Podcast ‘Bedtime Stories for the end of the world’ and attended a hair raising workshop with lead poets Malika Booker, Jack Underwood and Andrew McMillan

One of my favourite projects was a collaboration with artists exhibiting in Warwickshire Open Studios. This kept me on my toes, writing poems for a ceramic artist, a glass blower, a lino cutter, a pen maker and a painter.

I Autumn, I won the BBC Proms poetry competition for my unusually cheerful poem ‘Poekhali!’ inspired by Yuri Gargarin and Public Service Broadcasting, which was an amazing experience from start of finish.

With Ian McMillan at the BBC Proms Poetry recording

I also got to hear Liz Berry read at a Nine Arches Press event, and I am still somewhere, walking the streets with her in her collection ‘The Republic of Motherhood.’ Looking back over the year I have had work published in Cordite Review, Strix, Dodging the Rain and have even been nominated for a Best of the Net Award by their generous poetry editor Neil Slevin. Keeping the Celtic connection, I was in Dublin last week for the Book of Kells award.

Writing this blog has made me realise what a wonderful year it has been for me and I feel very lucky to have had the support of my family and so many great people in the poetry world. Having my first pamphlet accepted by Against the Grain has been a watershed moment.

There is never enough time but I am grateful for it all: the essays waiting to be marked, packed lunches to be made, the poems waiting to be found, dreamt or excavated from the chaos of everyday.