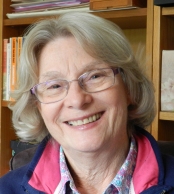 In Litany of a Cardiologist Denise ‘has composed a love letter to the heart, and the working lives devoted to its complex chambers.’ (Rebecca Goss)

Denise Bundred trained as a paediatrician in Cape Town and as a paediatric cardiologist in Liverpool. She is a Fellow of the Royal College of Physicians and has an MA in Creative Writing.

She won the Hippocrates Prize in Poetry and Medicine in 2016 and came second in 2019. She came third in the Ledbury Poetry Festival Competition in 2019.

Her poems have appeared in Envoi, Under the Radar, Magma and various anthologies including the Hippocrates Prize Anthologies (2012-2019).

Litany of a Cardiologist

Congenital Cardiac Anomaly
born with heart disease (as in child).

You filled a heart with wax to model the aortic valve in glass
with artery ascending. You pulsed grass seed in water
to visualise the flow.

How else could you know that blood curves
above each cusp to close the valve?

In the Villa Belvedere above the city of a thousand artists,
you mapped the impetus. Your pen hatched vortices on vellum
to match The Virgin’s curls.

You mirror-wrote in ink, arched words around
the diagram and fixed Science to its Art.

Five centuries pass before Magnetic Resonance
can image the heart of a child, asleep in a metal tube.
His aorta on my screen follows your vision in every line.

I watch systole circle like seeds above three cusps.
Diastole compresses them to complete the beat.