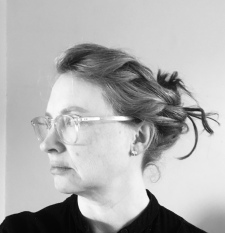 Natalie Shaw was born in Johannesburg. She grew up in London, where she now lives with her husband and three children. She studied at Cambridge University and began writing poetry in her late 30s. Oh be quiet is her first pamphlet.

“Natalie Shaw is a highly original poet with a vividly anarchic imagination… Her highly original collection Oh be quiet was full of surprising poems which could delight, disturb or knock you sideways.” Neil Astley

The first tray
I did not know this tray

The second tray
They came from Africa, two babies with them,
a mahogany crocodile, a kist for blankets;
two pairs of shoes dipped in copper.

They kept a set of tiny elephants,
smaller than their babies’ toenails.
There was a plastic crib, bigger,

plastic charms from Christmas crackers,
telephone directories the size of stamps:
these were the things the children looked at.

The third tray
The children got bigger. They lost the elephants
in the carpet, built Weetabix houses for ants,
they sat on the crocodile that lived in the kitchen.

Small as a borrower, the daughter climbed
into the tray on the wall. She ate
stale Parma Violets as big as her head

and danced with electric-haired trolls. Her daddy
laughed at her tiny Silk Cut, her ma
pulled her down by her hair and shook her

until she got so good at hiding
(in amongst charms, between the directories)
she knew she could stay for as long as she liked.

Things that I say to my enemy

While my enemy sleeps, I stand outside her house.
I send beetles into her dreams, a cockroach, a man
who hates her, someone running, the sly but persistent
notion her friends are only pretending to listen.

While my enemy sleeps, I turn others against her. I mention
things she has said that sound unpleasant, I kick
her leg while no one is watching. I let her see
letters from others in which she barely features.

I ask her a question I know she can’t answer, I snub her
at parties, I steal her ideas; I pretend I can’t hear her,
I say she looks lovely then laugh at her dress. I delight
in the shadows that  lengthen under her eyes, and note

with glee that her hair is quite greasy but mostly I shiver
to think of her lying awake and alone. I whisper
it’s true that she’ll never have boyfriends, a wedding, or babies
with soft little hands, her milk in their soft little mouths.