Fabulous to see this review over at Write Out Loud.

Whilst at their site check out theirBeyond the Storm Poetry Competition 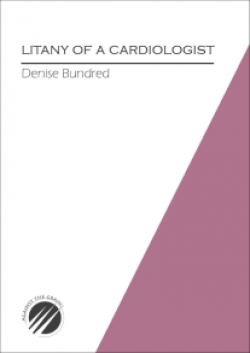 This pamphlet of 23 poems represents the remarkable poetic distillation of a lifetime’s medical experiences and insights. Denise Bundred trained as a paediatrician in Cape Town and worked as a consultant paediatric cardiologist at Alder Hey Children’s Hospital in Liverpool. She is a Fellow of the Royal College of Physicians, and won the Hippocrates Prize for Poetry and Medicine in 2016, and came second in 2019.

‘A Cardiologist Seeks Certainty’ examines the critical decisions involving “a heart/ no larger than the tiny hand/ pushing me away”. What a poignant yet exact image that is. ‘Addressing a Foetal Heart’ sympathetically transforms a developing heart’s problems into poetry:

Progress is orderly until a scattering of cells

in the aorta fails to form.

………who sets a foot a fraction out of place.

‘Disordered Heart’ is packed with tension and drama, with a happy result. The narrator makes an initial diagnosis, asks for the theatre team to be alerted, and afterwards addresses the child:

My pulse settles, now even less than yours.

We’ve done enough. Thanks everyone.

Sweat maps my back from neck to waist

to find your mum and dad.

There are a number of poems about relaying medical news to parents. ‘Weighing Words’ looks at the power of words in such situations, and sympathises with the problem of parents being able to understand them in times of stress. Saying the right thing:

I measure the space between words in nanoseconds.

at speed and you can’t read the names of station platforms.

Too long and the time between them swells

like the cupboard in the dark when you were a child

and you attribute more than I intend.

In ‘Today’s News’ the poet puts herself in the positon of a father receiving news about his daughter’s heart condition on the same day as the 9/11 attacks. The outside word impinges, or in this case, it just doesn’t. ‘Eighteen’ emphasises the youth of a child’s father, who is also a professional footballer: “He hesitates longer than on that first Saturday / at three o’clock when he emerged / from the tunnel at Anfield. / He tastes the adrenalin of panic.” The language in this poem is conversational yet measured, and always poetic, as it is in so many others.The juxtaposition of “astringent” and “flinches”, “tracksuit” and “pocket”:

He smells astringent on his hands,

signed pictures from his tracksuit pocket.

‘Foetal Scan’ is achingly poignant (“For a few minutes more / they think you are perfect”), whereas  ‘Blemish’ has a more positive, hopeful message. A couple of poems look at older heart patients: there is defiance and even humour in the face of the odds (“Impervious as your arteries / you plan a trip to Goa”), while ‘Synchrony’ can be seen as a cautionary tale for those of us who seek to dismiss warning signs.

Denise Bundred is from South Africa, and one poem, ‘Lucky’, encapsulates the struggles of that country in the life of a man with that name, born on the same day as the Sharpeville massacre in 1960, and dying in his twenty-seventh year during riots in Soweto.

There is so much inside this pamphlet. An expert in cardiology and poetry, Denise Bundred is clearly full of wonder at the workings of the heart – and transmits that wonder in weighted and precise yet transformative language and images. Not surprisingly, she has two poems in the recently published anthology of poems about the NHS, These Are The Hands. I’ve already quoted from her poem ‘Open Heart’ in my review of that book. Another of her poems there, ‘The Last Night on Call’, is one of two at the end of her collection that reflect on her feelings upon retirement:

How sharp the sparkle of adrenalin on my tongue.

I know I will crave its burn.

Denise Bundred, Litany of a Cardiologist, Against The Grain Poetry Press, £7