My pamphlet, Of Hearts, is available to pre-order at Broken Sleep Books – Of Hearts where you can also read two of the poems, At Point Nemo and Winter’s story.

“Karen Dennison’s Of Hearts opens with a poem about Point Nemo, the ‘spacecraft graveyard’ and furthest place from land in the ocean. The poem sets the tone for a pamphlet which explores our tiny place in a vast, overwhelming universe. It is full of crisp, lucent, technically agile and clever poems of cosmic longing. Of Hearts is a deeply enjoyable pamphlet from a poet with her eyes pressed to a telescope, searching until ‘the stars switch off’.

Sarah Westcott‘s first collection Slant Light was published by Pavillion Poetry, an imprint of Liverpool University Press, in 2016. A poem from the book was highly commended in the 2017 Forward Prizes. Her debut pamphlet Inklings (Flipped Eye) was a Poetry Book Society pamphlet choice in 2013. Her second collection Bloom is due with Pavillion Poetry in April 2021. Sarah is one of 97 poets whose lines are featured in Arrival at Elsewhere, a book length long poem response to the pandemic, curated by Carl Griffin.

Sarah Westcott on Arrival at Elsewhere

When Carl first got in touch requesting fragments written during the pandemic, we were deep in the strange spell of the first lockdown. Our children were untethered from school, blinking in an unsettling freedom. April was opening in an exquisite, almost mad way with an inevitability and momentum unmatched by any other season. The immediate, greening world made me think of Jean Sprackland’s ‘machine’ of spring with all its ‘levers thrown to max’. Something in the spirit of openness in Carl’s invitation appealed, the sense of finding something not yet written.

Years before, my mother had given me a small, hand-made notebook with a pigeon on the front. It lay, quietly, in a drawer. One evening, feeling a desperate need to set something, anything, down on paper, I took the notebook out and began:

Each day the number theatre was played out. Death hung at the edges of things, a pink pall in grained evening skies. Pear blossom frothed and fell, elderflowers glowed like saucers of cream when I woke at 3am, unease rising. I felt deeply, alertly alive. Our neighbour’s wife, Yvonne, died with the virus in her body. The street came out and clapped as her husband was driven to the funeral. My partner’s great aunts died, in New York, where they buried the dead in mass graves. The walnut tree put out soft floppy leaves. The sun’s warmth was beneficent, excessive. The first swifts arrived. The road was quiet, then quieter.

The street came out of our houses today and stood in silence then clapped as the widow was helped into a car and driven away.

I knew how privileged we were with a garden, and good health, paid work. Yet, some days I felt a part of me going under. In the evenings, once nobody wanted anything more, I would look out of the window, be still. I would open my pigeon notebook and write, just ten minutes, write for the pleasure and joy of writing, looking for something and nothing at all with my pen. Fragments, the tangible, insistent present. Me, in there, my small blue flame. Each entry long or short as I liked, each day a different pen, a different woman. The book filled up and I collected the fragments without evaluation. I knew they would build into something I could send to Carl, that they were a small articulation of being alive.

To write without pressure or expectation is where we can encounter a deeper more playful self, and this is where the work with breath in it, or light might emerge. When I think back to that writing time there was something of the joy of being a teenager again, a preoccupation with the self and its movement through an uncertain, dynamic world. 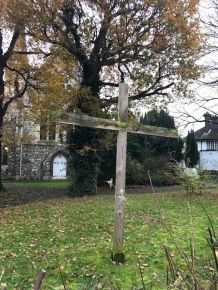 My four-year-old son became fascinated by a wooden cross in the grounds of the local church. Some evenings, we would walk up the road to ‘see the cross’, the grass below it thick with clover and dog violets. I started to pick wild flowers and take them home, to study and to write ‘through’ their alterity. I was careful to only take one or two, as much as I needed. I watched them wilt and fade over time. I thought of Robin Wall Kimmerer’s idea that plants can be ‘eloquent in their physical responses and behaviours’. Plants, she writes in Braiding Sweetgrass,’ answer questions by the way they live, by their responses to change.’

There was hope in that engagement with each flower, attention well ‘spent’ on its intricacies and mysteries. Arrival at Elsewhere is full of plants and flowers and I find pleasure in the sense other poets were drawing comfort and some kind of meaning from their presence too.

I remember the wooden cross in the church grounds with a crown of barbed wire. We approach it across wet grass – the shape is atavistic – four points like a body – the raised head and still legs. I think my son cannot tell between real cross and apocryphal. I think we all enjoy entering these uncertainties.

Under the cross are dog violets in various stages of growth. I take three to study at home. I put my glasses on, there is a pale, striped opening in the middle lower petal, the stripes like veins in the back of the throat, drawn by the cell’s inheritance, leading in to the back of the slipper, the heel, the spur which when pinched is surprisingly firm.

Our dog began to die. I painted a bunch of sunflowers, with my daughter drawing too. We sketched flowers, bodies, trees and graves. Death moved in and out of the corners of our lives. There was a constancy and a guilt. A loved one started radiotherapy. I followed the progress of Michael Rosen on Twitter, I watched Grayson Perry and Chris Whitty, I watched the actors behind their podiums, in front of the cameras. I thought of my sister working on hospital wards and the tens of thousands of others knitting our fragile society together and I felt remote and close and privileged and afraid.

… How dependent we are on the light, the chains. The air we inspire is nothing more than one person away …

When I sent my fragments off to Carl, I was interested in the mass of them and how many there were. They felt like small samples or missives from a receding past but they were also unwieldy, indulgent. I felt no sense of ownership and yet they were mine; they had come from me. I liked the sense of giving my lines over to another mind, for them to be cut and stitched into a larger flow of words and perceptions and feelings. Arrival at Elsewhere is a complete poem, a shifting, lyrical voice. Its lines and voices press against these edges of freedom and constraint. The whole poem pulses with a kind of bound, shifting energy that I think we all know in our bodies. Like my notebook, it is a document of 2020 with a voice of its own, each small word precious in its articulation.

Arrival at Elsewhere is available to buy here in aid of NHS Charities Together.

of barbed wire. We approach it
across wet grass – the shape is atavistic,

four points like a body,
the raised head and quiet legs, still.

It’s a long, slow wrinkling we walk on.

I think my son cannot tell between
real cross and apocryphal –

I still enter these uncertainties.
The longer the trail behind,

the less it stays behind. It curves –
not social distancing, not that

awkward choreography of swerve,
no, but as if a tuck is taken in fabric,

Inside the church, mass is cancelled,
one contagion yielding to another.

Recent looks far away
and long ago. Far away turns

into here, now, so you leap back.
Distant conversations surface.

If memories can live in an element
that lets them dive and sink,

Under the cross are dog violets
in various stages of growth.

I once took three to study
at home. Indoors, with my glasses on,

I noted the pale opening
in the middle lower petal, the stripes

like retinal veins. An organ
sits idle in its moorings,

its music dormant in the pipes.

Hell knows all hiding places.
Hell invented them.
That’s what makes it Hell.
When the rain comes, and it will,
the sand will not shelter your head.

There was something godly about it.
Something definite
about the way everything starting to drip,
how all the good china started to run and
the animals became unusual.
People were pinning bed sheets to the sky
and coughing to hide the rumble.
The sky was painted biblical.

I dreamt there were waves
lapping at my bedroom window.
We, dry as a strong face
quietly watched the world rush by.
The flood pulled back into a beast
and lunged at our house –
we’re going to die, I thought
we’re going to be crushed and drowned –
but the walls didn’t quaver
and we held each other madly.

Once, I ran for the sky without learning to swim