Following hot on the heels of Joyride, published last year by The Black Light Engine Room, Jessica Mookherjee’s first full-collection, Flood, is published this week by Cultured Llama. Poems within this collection have appeared in a whole host of magazines and journals; Mookherjee is quite a prolific poet and last year a poem published by Sam Smith in The Journal was commended in the Forward Prize. Mookherjee is also part of the Telltale collective. 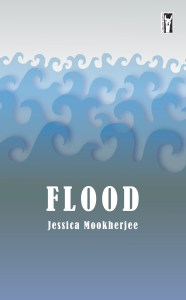 I haven’t seen a copy yet but can share with you a little bit of blurb, endorsements and a poem… “In these poems, Jessica Mookherjee inhabits several identities in her ‘bone-framed coat’. With overarching themes of migration, otherness, sexual awakening, maternal mental illness, the impact of catastrophe, of loss and being lost, Flood is a debut collection from a genuine virtuoso with a powerful original voice.”

The trick was sewn…